Chocolate! Vanilla! Tartlets! Perfect combination. I’ve always wanted to do a vegan ‘cheese cake’ variation, or better still, one with a chocolate dough, similar to ‘Russischer Zupfkuchen’ (= ‘Russian twitch cake’ – does this exist outside Germany? ; )). Anyway, I came up with these sweethearts.

For the chocolate dough, mix with a spoon…

Blend with a mixer until the dough is well worked but still crumbly. Continue by kneading the dough until it becomes a supple ball. While you’re preparing the vanilla cream filling place the dough in the fridge or a cool place to rest.

*Most of the commonly available margarine has added vitamin D which is derived from the fat between a sheep’s wool and skin. It’s vegetarian, as the sheep isn’t slaughtered, but not vegan. Of course you can decide how important this is for you, but as there are 100% vegan alternatives in every supermarket (at least in Germany), it’s not difficult to avoid. Even if the package states ‘pure vegetable’ (‘rein pflanzlich’), it doesn’t necessarily mean it’s vegan – here in Germany, there’s currently no legislation for using the term in a meaningful way. If shopping in a German supermarket, go for Sojola (made from soy) or Deli Reform Original.

For the filling, blend the following…

Meanwhile, take the chocolate dough and roll it into little balls, like in the picture below. Use your palms to press the dough-balls into little discs about 1cm thick, so they fill a paper cupcake case. I always use a metal cupcake tray filled with paper cases for stability. Put the dough in the paper cases, spreading evenly. There shouldn’t be any holes in the dough and the thickness should be kept roughly equal in each direction. Allow the dough spread over the sides of the cases to cover the edges.

Now use a spoon to fill with vanilla cream. Put enough cream in, but make sure it doesn’t overflow. Curl the edges of the dough around the filling, like building a little nest for the delicious vanilla cream ; ) Pop in the oven for about 25 to 35 minutes. 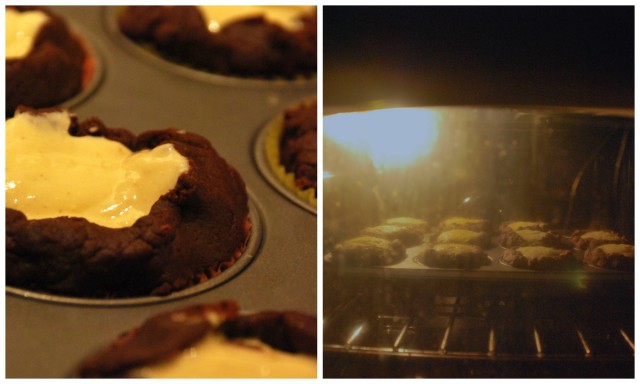 The baking time really depends on your oven. From time-to-time, use a wooden skewer to see if the centre remains gooey. They are ready when the filling is still soft and chewy, but has turned golden on the surface, plus the dough has hardened.

And now, enjoy your little treat! 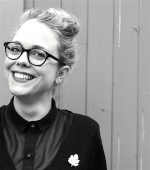